Teenage prostitute being a hit in Kuwadzana 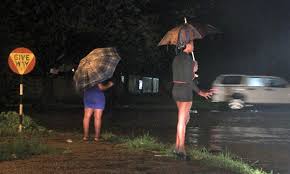 Kuwadzana is a Shona word with deep meaning; it literally means staying harmoniously in the community. However, this has not been true for Ruvimbo (14) who joined the oldest profession – prostitution – after she fell pregnant at a tender age of 13.

The incident infuriated her parents to the extent that they chased her away, forcing the young teenager to start fending for herself through prostitution, a trade that only banks on age and physical beauty.

Ruvimbo is now a mother to a six month-old baby, pushing her to sell herself more to males so that she can feed not only herself but also the new addition to her family. To maximise on her earnings, she now leaves behind her child locked the one-roomed lodgings as she goes to Kuawadzana 6 shops to solicit for clients.

“I was impregnated when I was doing Form 1 and my parents were very angry, so they said I was no longer their child and told me to leave their house. I was clueless, I didn’t know what to do; I just went to the bar and started making money from there. Yes, I started selling my body whilst I was pregnant.

“I raised the money for my rent and started staying here. I managed to buy preparation for my child through that way. It becomes my daily routine, now I leave my child sleeping at home so that I go and work. That’s how I will have to put food on the table for my child,” explained Ruvimbo, with tears in her eyes.

She told ZimSentinel that clients are from all age groups, but she prefers older men “who pay much better compared to their younger counterparts”.

Underage prostitution is a prostitution of a minor or a person under the legal age of consent, which is 16 years in Zimbabwe. It usually manifests in the form of sex survival in which the child engages in sexual activities to procure basic essential such as food and shelter.

Besides parents’ bitterness, the current economic situation in Zimbabwe has resulted in many children engaging in prostitution as a way of meeting their material needs. The deepening economic crisis is causing men to be insensitive and take advantage of poverty ravaged young girls to sexually exploit them.

“Men are taking advantage of these desperate kids and use them, spreading diseases. This is as a result of the economic challenges, they know even a small amount is very important to a desperate kid. This is really bad, the government should intervene”, said a Kuwadzana resident, Loveness Shoko

It is a criminal case prostituting with a child of that age, but there are no cases of any old men arrested for that offense yet it is being practiced daily.

Ruvimbo’s landlord, Rudo Mutarire said the government should swoop and arrest pedophiles, who are targeting young girls because what they are doing is just the same as raping a minor.

She also urged the government and all organisations that deal with girl child to assist children who are in trouble by giving them loans rather than leaving them risking their lives.

An elderly Kuwadzana resident, who identified herself as Gogo Zviko said teenagers of this era need to be educated on dangers of indulging in sex at a tender age and those parents should not neglect their children because of mistakes they have made, but rather educate them the right way.