In Zimbabwe, especially in the country’s rural communities, child marriages continue to be the wolf dressed in sheep clothing. They happen on a daily basis yet society tends to turn a blind eye towards them because of ignorance, cultural and religious beliefs among many other reasons. Girls and boys as young as 10 are married off to start their own lives and families by their parents without any hesitation.

Section 81(1) of the Constitution of Zimbabwe 2013 states that a child is a boy or a girl under the age of 18 years. Therefore, child marriage refers to any marriage carried involving a child below the age of 18, when he or she is not yet physically, physiologically and psychologically ready to shoulder the responsibilities of marriage.

Despite the existence of numerous international and regional human rights laws and conventions against child marriage such as the African Charter on the Rights and Welfare of the Child (ACRWC) (1990) and the 1989 Convention on the Rights of the Child (CRC) among many other which Zimbabwe ascribes to, there is lack of implementation or action against child marriages that need to addressed to ensure children in the country, especially girls, are not wantonly abused under the guise of laws like the Customary Marriage Act 2 which was once silent on the age of marriage (supporting child marriages) before the Constitutional Court inserted an age limit of 18 years and above for marriage into it in 2016 after a crucial landmark judgment was made concerning the Mudzuru and Tsopodzi case.

Also the judgement saw the immediate repealing of the Marriage Act 1 sections that allowed for a girl of 16 years and above to get married.

However, in the Mashonaland East Province in Mudzi under Mutoko District, marriage among primary and secondary school children has become a scourge. As girls elope at a young age.

Like the story of 16 year old Talent Magwaro (not her real name) who shares her experiences, “…when I eloped I was 15 years old, at first my parents wanted to get my husband arrested because I was still a minor, but eventually they reached an agreement with my boyfriend’s parents and I got married, but the journey has not been easy.

Listen to the audio comment: Pregnant girl speaks her ordeal

“I would like to urge girls my age not to rush into marriage because it is difficult sometimes, especially when your husband is committing adultery or abusing you simply because he was not ready, it compromises both the lives of the mother and unborn baby as too much stress results in high blood pressure during pregnancy,” explains the 16 year old. 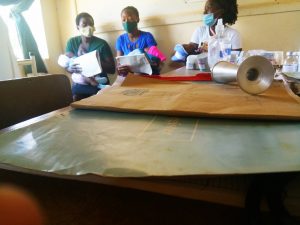 According to page 47 of the 2019 Multiple Indicator Cluster Survey (MICS) which provides rates of women aged 20 – 49 years who were married or engaged before the age of 18 years, a greater percentage of women in rural areas were married before 18 compared to those in urban areas, and in this category the Mash East Province is at 38 percent, an increase 2 percentage increase from a 36 percent child marriage rate which the province recorded as the third highest from Mashonaland Central and Mashonaland West in 2016.

The figure may be slightly higher now on the back of Covid-19 induced lockdowns that somehow interrupted proper schooling by the girl child.

Below is a graph showing the trends in the rate of child marriages: 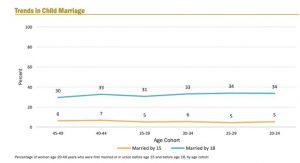 In Mudzi marrying or getting married at a very tender age has become a normalcy which community members witness without putting too much effort to try and prevent. And this has left local health practioners worried
“I think early child marriages that are happening in our community are being perpetrated by unsupportive parents who do not trace, follow up, report or do anything when a minor (their child below 18 years) gets married or elopes. I am not sure if it is caused by lack of knowledge because the illiteracy rate is high here.

“The reactions of the married minors and their husbands, are also contributing as at times when the married child’s parents intervene and go to take their child, the child runs away returning back to the husband’s house or both the child and husband run away together. So it has become common for girls in this area to get married at a tender age,” said a nurse in one of the clinics in Mudzi.

“As a nurse I recommend that there be an initiative by influential leaders such as Non-governmental organisations (NGOs) in educating community members and the children because we cannot do it alone. Their communication should penetrate remote areas like Makaha,” she added.

This increase in child marriage cases in Mudzi is not only affecting the development of its rural communities, but is also threatening the country’s educational system which saw the country recording the highest literacy rate of 94 percent in 2018.

For instance, primary and secondary school girls receiving educational support through the Basic Education Assistance Module (BEAM) and the Campaign for Female Education (CAMFED) can leave school for marriages before turning 16 or 18 years and before completing their primary or ordinary because of the prevalence of cash amongst illegal gold poachers in the area.

“Girls in this area love money and food, the existence of many illegal gold poachers (magweja) here has attracted the attention of a lot of school girls who will be hungry for money (US dollars) and food stuffs like Jiggies and Zap Nax, hence they end up having unprotected sex with those illegal gold poachers and elope due to pregnancy,” narrated school children from one of the schools in the area during an interview.

Apart from the prevalence of cash amongst illegal gold poachers, oppressive religious customs from the Johanne Marange Apostolic sect have been accused of being one of the major causes of early child marriages in the Mashonaland East Province. The Johanne Marange Apostolic sect is one of the most common religions in Mashonaland East.

According to Great Zimbabwe University’s 2017 case study on Causes of Child Marriages in Zimbabwe: Case of Mashonaland Province in Zimbabwe, the sect is believed to constitute 1.2 million of the country’s population. The study revealed that this sect is found in most districts in Mashonaland and the followers believe that marriages are approved by the ‘holy spirit’ therefore cannot be disputed by anyone. Girls in this church are married off to older people at very tender ages with minimum education which cannot empower them adequately to sustain their lives and health.

Also, lack of adequate sexual reproductive health (SHR) information and services in the area has been another contributing factor. It has resulted in minors indulging in unprotected leading to teenage pregnancies.

However, boys have also become victims of early child marriages in the province, especially Makaha. The prevalence of abundant minerals and the practice of small-scale mining at a larger scale has resulted in boys dropping out of school in a bid to make quick money, resulting in them marrying young.

Meanwhile, the Ministry of Primary and Secondary Education (MoPSE) urged parents and to protect their children and preserve their rights to education, good health and wellbeing.

“Child marriages are caused by irresponsible parents and communities that condone such ungodly behaviour. As MoPSE, we are strongly against any forms of abuse to our learners, in particular rape, sexual abuse and child marriages. We appeal to communities, parents and guardians to protect our children from hyenas masquerading as potential husbands. We envisage a situation where our learners utilise our quality education to their full potential for the socio-economic development of the nation,” said the Ministry.

Human rights standards and norms require that the rights of particularly vulnerable groups be respected, protected and fulfilled and several studies recognise that child marriage limits girls’ rights to education (International Centre for Research on Women, 2005). Denial of education and health leads to denial of other rights such as right to work and right to life among other rights. The right to exercise by choice in relation to a spouse has also long been recognised in human rights law but there are many serious loopholes and inconsistencies in national laws on minimum age of marriage that undermine these rights for example a rapist being allowed to marry underage girls they have abused.

Article XXI of the African Charter on the Rights and Welfare of the Child (1990), provides that child marriage and the betrothal of girls and boys shall be prohibited and effective action, including legislation, shall be taken to specify the minimum age of marriage to be eighteen years. This aspect is not very clear in the Zimbabwean constitution which makes it difficult to counter child marriage.

Also, Articles 2,3,6 and 12 of the 1989 Convention on the Rights of the Child (CRC) which stipulates that people under the age of 18 need special protection and care that adults do not need, promotes; non-discrimination – that is, no child should be ill-treated on any basis; devotion to the best interests of the child – meaning adults should consider children’s interests when making any decisions; the right to life – survival and development and respect for the views of the child – that is adults should take into account children’s views on matters that affect them and the matters should be within their maturity level of understanding, respectively.

Although, these rights for children are also specified in the Zimbabwean Constitution evidenced by section 81(2) which stipulates that a child’s best interests are paramount in every matter concerning the child and section 81(3) which states that children are entitled to adequate protection by the courts, in particular by the High Court as their upper guardian, as well as section19(3)(b) which is of the view that states must adopt all policies measures to ensure that children are not required or permitted to perform work or services that (i) are inappropriate for the child’s age or (ii) place at risk the child’s well- being, education, physical or mental health or spiritual, moral or social development, they are violated when children are married before they become adults.

What is very worrying is the country’s lack of proper implementation and alignment of these laws which is promoting child marriage in a way, thereby jeopardizing girls’ rights and standing in their way to educative, healthy and productive lives.