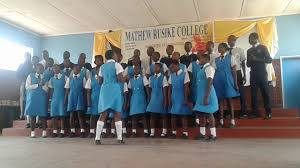 Studies at Mathew Rusike college have been thrown into disarray, less than three weeks before public Ordinary Level examinations commence amid concerns that some of the administrators have embezzled $97 000 that was meant for staff salaries.

Some teachers have been absconding lessons citing incapacitation as the school has been struggling to pay them on time. This has a knock-on effect on students who are preparing for their final examinations and are now wary of their passing chances.

A student at the school told ZimSentinel that teachers were not attending lessons.

“Teachers are not being paid, so they are no longer attending lessons.  ‘O’ levels are having at most three lessons per day than normal lessons they used to have. This is really affecting ‘O’ and ‘A’ level students as they about to write final examinations,” she said.

Another student said that students are being sent off home to collect school fees to cover up the missing $97 000.

“This is a serious issue at our school, which need immediate response. It is pathetic that ‘O’ level students who are writing their exams in the coming weeks are being send home to collect money to cover up the missing money. This is not fair, as these administrators are benefiting at the expense of the students,” he said.

An ‘A” level student said they are now having extra lessons with private teachers and this was expensive to them due to the decline of economy and hyperinflation.

“We are now resorting to other alternatives like having extra lessons with private teachers. This is costing us as these private teachers are charging exorbitant fees. This has worsened our life as our parents are trying to deal with effects of the ravaged economy,” he said.

The school deputy headmaster Mr Mashava and the senior Lady who refused to be identified by name, however, denied the embezzlement allegations saying everything was normal.

“We are not aware of the missing money and our teachers are doing work as usual,” said Mashava.

Youth Organisation plough back to the community