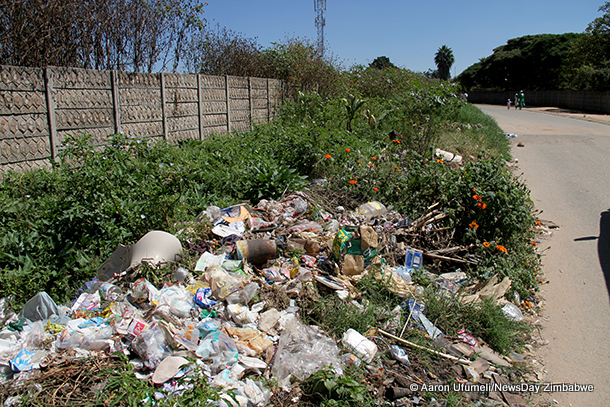 The dire absence of consistent and systematic refuse collection has led to the accumulation of diapers in urban suburbs of Zimbabwe. It is now a common feature that urbanities now dump used diapers in open spaces posing a serious health risk to residents. A sea of flies is generally seen at open dump sites within the vicinity of homesteads and is seen as a recipe for the outbreak of water borne diseases such cholera or typhoid. Pets like stray dogs and cats which frequent these dump sites to get food are likely to be the vectors which will spread diseases in the communities as they get in contact with human beings.

In addition, children also rummage the dump sites scrounging for playing materials and scavengers too burrow through the dump sites looking for re-usable materials without any protection such as gloves or masks thereby exposing themselves to diseases.

According to UNICEF, baby diapers are a personal hygiene product that designed to contain the babies’ urine and faeces, in order to avoid soiling the baby’s clothing, bedding and the surrounding environment.

In Zimbabwe the best methods available to dispose of diapers is through collection by the City Council to the designated dumping sites.

The challenge with most communities is that they deposit used diapers in regular refuse bins. This is made worse by the inconsistence to collect refuse. In the event that refuse bins are not collected in time, communities end up taking garbage to dump sites, oblivious of the attendant health hazard to the communities. Diapers cannot be flushed in lavatories as they block sewer drains. And the option of burning them is impractical in most high density areas as they pollute the environment.

The lack of a proper diaper management collection mechanisms in most local authorities has left residents in some Harare suburbs such as Kuwadzana Extension with limited options except to dump them in the vicinity of the residential places and open spaces.

Another young woman from Kuwadzana Extension explained that diaper disposal is difficult as the council take long to collect.

“We end up, dumping them in the vicinity of our residence to avoid flies at home. Unfortunately, the City Council takes long time to collect the garbage hence resulting in us taking garbage with diaper to the outskirts of our homes.”

“pets like cats would rummage the garbage and sometimes drag the used diapers home. We therefore ask the City Council to swiftly collect the garbage to avoid inconveniencing residents.’’

According to the World Health Organisation (WHO) Guidelines on sanitation, safe sanitation is essential for health, from preventing infection to improving and maintaining mental and social well-being. The lack of safe sanitation contributes to diarrhea, a major public health concern and a leading cause of disease and death among children under five years in low-and middle –income countries; poor sanitation also contributes to several neglected tropical diseases, as well as broader adverse outcomes such as undernutrition. Lack of access to suitable sanitation facilities is also a major cause of risks and anxiety, especially for women and girls. For all these reasons, sanitation that prevents disease and ensures privacy and dignity has been recognized as a basic human right.