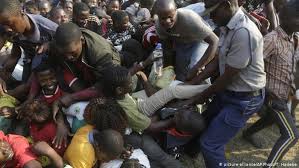 The late President Robert Mugabe maintained his crowd pulling powers when thousands thronged Rufaro Stadium to pay their last respects to Zimbabwe’s founding leader, an event that nearly turned chaotic as many jostled to get close to the casket resulting in some getting injured.

Mugabe body was taken to the stadium where Mugabe took his oath of office in April 1980 during Zimbabwe’s independence that was attended by Prince Charles (representing the British monarchy) and many other international dignitaries. Bob Marley also came and performed at the first independence celebration of Zimbabwe.

Mugabe died in Singapore last Friday after a long illness.

The commotion started when members the public were called to view the body of the late Mugabe. There was a stampede as people jostled to catch a glimpse of the late former President Robert Mugabe during a body viewing procession.

Many of the injured were attended to by paramedics, while a quick police intervention saved the day when they moved in to quell the commotion.

Police was not immediately available to comment on the numbers of the injured.

Victims of the stampede said they were not expecting to get injured and blamed the lack of proper security to contain the situation.

Mbare resident Tatenda Joseph wished the veteran leader would rise from the dead and see what he caused.

“I wish the old man would rise and see what he has caused.” he said

“Can you call my brother, what I was doing here?” said one Brighton “It would have been better if they had enough security all this would not have happened.”

Meanwhile, a lot of those who attended had good words about the late President.

Prosper Chiweshe from Highfields said the death of Robert Mugabe had pained him.

“I was pained by the loss of President Mugabe and it is unfortunate that his death has brought injuries to those who wanted to have a glimpse of his body.”