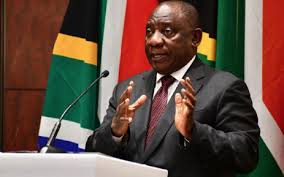 FOR the first time in a long while, the people of Zimbabwe celebrated a rare moment of triumph of the peoples’ power when against all expectations and protocol they forced South African President Cyril Ramaphosa to publicly apologise to Zimbabweans and other Africans who have borne the brunt of Afrophobia in the past three weeks.

The 25 000 strong-crowd that came out to bid farewell to late President Robert Mugabe at the National Sports Stadium State funeral booed Ramaphosa stopping him from making his eulogies for the late national hero. The crowd despite  cajoling from Home Affairs secretary MelusiMatshiya did not back down, prompting Ramaphosa to cease the moment back by publicly addressing xenophobia and Afrophobia that has engulfed South Africa for the past three weeks.

Ten days ago Ramaphosa suffered the public rebuff from his colleagues, Paul Kagame, Peter Mtharika and Nigerian President when they boycotted the World Economic Forum in Cape Town in protest over South Africa’s tame response to Afrophobia.

“Representing South Africa, I apologise for the act of violence done by South Africans against fellow Africans, which contradict with the principles of peace and unity as encouraged by the late Robert Mugabe and Nelson Mandela,” Ramaphosa said.

He added that he was working on encouraging South Africans to embrace people from all African countries.

“South Africa is not xenophobic. We welcome everyone to operate in our country freely and peacefully,” he added.

It was telling that all the other foreign dignitaries that spoke received applause, yet Ramaphosa got a baptism of fire from the same crowd. The crowd’s action may cause South African authorities to change course and protect fellow Africans in their country. The recent Afrophobia attacks are the third with a decade.