by zimsentinel
in Opinion & Analysis, Politics
0 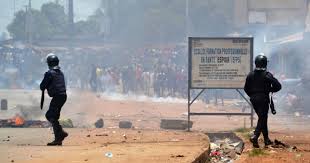 SADC countries are slowly turning into despotic states and increasingly banning demonstrations aimed at showing displeasure with the ruling governments that are failing to satisfy their electoral promises as economies continue to nosedive, with Zimbabwe and Malawi being the latest to ban protests.

Ironically, Zimbabwe President Emmerson Mnangagwa was last month appointed the new chairman of the Troika, the regional organ for Politics, Defence and Security, which is expected to mediate in the affairs of member States that face instability. It is baffling how Mnangagwa is expected to help resolve cases of instability in the region when he is facing incessant protests at home.

Zimbabwe witnessed violent demonstrations after the July 2018 general elections. There have been rising cases of intimidation against activists by the police and army, banning of demonstrations and abductions of human rights defenders and opposition party activists. Like Zimbabwe, Malawi has also banned demonstrations in the capital Lilongwe following a disputed presidential election held in May.

Three months after holding peaceful general elections Malawi citizens were marching in the streets against the disputed presidential results, accusing the Malawi Electoral Commission (MEC) and its chairperson Jane Ansah of rigging the election in favour of the ruling party. This has led to a clash between the government security forces and protesters, which resulted in many losing lives and businesses destroyed.

Malawi Attorney-General Kalekani Kaphale obtained a court order to ban the gatherings on behalf of the government. The Malawian leader Peter Mutharika was also said to have publicly ordered the army and police to use force to stop the protesters “by all means necessary”.

Before Malawi banned demonstrators, Zimbabwe main opposition, the MDC, had organised demonstrations starting from August 16 against the government’s failure to address the economic situation, but the protests were banned using the obnoxious Public Order and Security Act for the next 90 days. An application for review of the police ban was unsuccessful at the High Court. Those who defied the ban and proceeded into the streets were brutally assaulted and arrested despite the fact they were peaceful.

Zimbabwe has also witnessed a worrying trend of vocal activists being abducted in the homes in the dead of the night, tortured and dumped before they could be rescued. According to the Zimbabwe Human Rights NGO Forum, at least 6 opposition and human rights activists were abducted and tortured by unidentified assailants in the days leading up to the protests and after the protest ban.

In Malawi, at Crossroads Hotel, Lilongwe, where members of HRDC met the Attorney-General and the Malawi police hierarchy to discuss the way forward on post-election demonstrations, an unknown person was reported to have attempted to bomb a vehicle belonging to the HRDC.

Maybe it’s an old age strategy by the Sadc member States to retain power as disproportionate force has also been used to quell protests in Lesotho this year.

South Africa, the regional economic powerhouse is battling xenophobic attacks that have seen thousands of African immigrants displaced from their homes and forced to seek shelter in churches and at police stations.  The ANC government does not have a clean reputation too after in August 2012 deployed armed police officers to quell a miners’ demonstration for better wages in Marikana. The standoff ended when police killed 34 miners and injured scores in cold-blooded murder