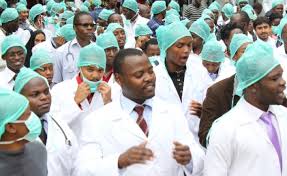 DESPITE the government newly introduced ban of strikes by essential services including health workers, doctors yesterday embarked on a go-slow as they pushed their employer to offer more than the 60% salary increment offer on the table.

There were many patients who were unattended at Parirenyatwa Group of Hospitals yesterday as the doctors took their time.

The Zimbabwe Hospital Doctors Association spokesperson Peter Mugombeyi, last week said they did not have any means to continue reporting for work while being offered a worthless salary.

At Parirenyatwa Hospital yesterday there were long queues of patients waiting to receive treatment, with some of them critically ill and could not sit or stand by themselves and had to lie on stretcher beds as they waited for doctors to report for duty.

Talking to ZimSentinel, the patients at the gynuelogist waiting area who were waiting to see the gynecological oncologist said they had been waiting for doctor since early morning, but had not been attended to.

“We have been here since early in the morning and it’s now 1200, but the doctor is not yet here. We are waiting for him we can’t go home without being treated. The nurse has said they will call the doctor to come and serve us.”

Some patients who were sleeping on beds in the waiting room said they had come to see the oncologist, but he was not there since Monday. They still hoped the doctor would because their health was in a critical condition.

A nurse at Parirenyatwa told the ZimSentinel that the gynecologist would come and serve the patients, but she was not certain what time he would pitch up.

“The doctor is coming, but I don’t know what time. The patients should wait for him and they will be served when he comes.”

This not the first time medical doctors have embarked on an industrial action. Earlier this year, the doctors went on strike for a month and only resumed duty after government pledged a salary hike as well as improving working conditions.

Last week, they alerted the government of their plan to embark on industrial action starting from September 3, saying delays by the Health Service Board to review their salaries has rendered them incapacitated.

US$5 for a quickie: Sex workers in love with the Greenback