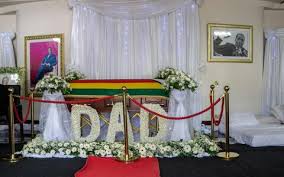 The Mugabe Family has condemned the government’s funeral and burial programme for the late former President Robert Mugabe saying they were not consulted and it was contrary to the deceased requests.

They also alleged the government was coercing them to accept the programme.

In a press statement, the Mugabe family said: “We are ready and willing to work with the Government of Zimbabwe to develop a programme for the funeral and burial of the late Robert Gabriel Mugabe which is in conformance to his wishes on how his mortal remains will be interred.”

The family said it was shocked by the attempt by the government to coerce it to accept the funeral programme which is in contrary to Robert Mugabe’s wishes on his burial.

“One of the wishes that the late Robert Mugabe indicated was that his wife, Dr Grace Mugabe, MUST NEVER Leave the casket bearing his remains for the duration of the funeral proceedings whilst in Zimbabwe up until his mortal remains have been interred,” the statement read.

Mugabe died in Singapore last after battling an ill health for some time and is expected to be buried on September 15, according to the government programme.