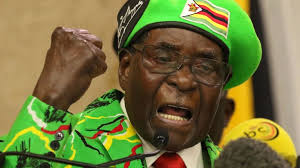 ZIMBABWEANS learnt of former President Robert Mugabe’s death on 6 September 2019 at the age of 95 with mixed reacts, some blaming him of causing an economic decline through his dictatorial and corrupt leadership.

Mugabe became the country’s first post-independence leader from the colonial Ian Smith Rhodesian regime. He died in Singapore after battling ill-health for the greater part of this year. He was removed from power through a military coup in November 2017, marking an end to his 37-year rule.

Many citizens are not grieving over his death saying he caused the economic the deterioration, leading to untold poverty and hunger in Zimbabwe.

“He does not deserve to rest in peace because he caused the decline of our economy through his dictatorial acts,” said a vendor, Tatenda Tazira.

A business entrepreneur Trymore Chikore told Zimsentinel that Mugabe was a dictator, who butchered opponents, rigged elections and squandered the resource while his people were suffering.

“Mugabe was a dictatorial leader who reigned for 37 years by butchering his opponents and rigging elections. When (Morgan) Tsvangirai won the elections in 2008, Mugabe fought back with violence and the threatened bloodshed to break the power sharing government of national unity in which held on to the presidency,”  Chikore said.

Other citizens have described him as a ruthless authoritarian, who was not burdened by democratic practices.

Despite the fact that the death of Mugabe is a huge loss to Zimbabwe, some citizens have condemned his despotic government before he was removed by (Emmerson) Mnangagwa, saying he was the one who created the current system and his predecessor is feeding off it.

“The guy was not a saint, he is the chief architect of the situation we have today. All he wanted was concentration of power by all means necessary. His greatest asset was his oratory and propagandistic tactics. Given only five minutes, Mugabe would convince one fish could fly. Anyway, may his soul rest in peace,” Lucia Chibwayi said.

Although many people have condemned the late former President for his wrongdoings, other citizens have described him as a true hero, who fought for the country’s liberation and said his ability to maintain order and stability in the country will always be remembered.

Mugabe was born on 21 February 1924 at Kutama Mission in Zvimba. Despite his dictatorship, his contribution to the history of Zimbabwe and Africa will never be forgotten