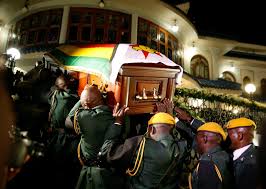 By Success Majaramhepo and Rutendo Bamu:

The Mugabe family and President Emmerson Mnangagwa administration have found a queer solution to the burial of Zimbabwe founding leader Robert Mugabe and agreed that a “symbolic” public burial would take place on Sunday at the national Heroes Acre, but the body would be immediately taken to Zvimba for rituals.

Mugabe family spokesman Leo Mugabe this afternoon confirmed to journalists at Rifaro Statdium during the public body viewing ceremony of the late national hero that the former President would be buried at national Heroes Acres at a date to be announced after the family concludes traditional rituals.

“His body (Robert Mugabe) will be taken to the Heroes Acre on Sunday, where the burial procedures as a hero will take place and the gunshots will be shot,” Leo said.

He added that after Mugabe is declared a hero on Sunday, the family will take the body for its traditional activities which needs to be done and that although the government had declared Robert Mugabe a hero, the family has the power to decide where they want their relative to be  buried.

Leo further stated the actual burial of the late President would be private and attended by family members and friends only.

“His actual burial is private. I don’t know if the media will be welcomed, we will cross the bridge when we reach that river. Obviously, the close relatives and friends will be invited,” he added.

Curiously today, the widow Grace was not present at Rufaro Stadium despite the family claiming the deceased leader had specifically instructed that the widow should at no time be out of sight of the casket until he is interred.

Leo explained Grace’s absence saying “Amai Mugabe is not here today because we have decided to give her some time to rest. It has been long week mourning without rest.”

Former President Mugabe died on September 6 in Singapore where he was receiving medical attention since April. Tomorrow there will be a State funeral service at the giant National Sports Stadium in Harare. The event would be graced by foreign dignitaries including serving and former Heads of |States and Governments.