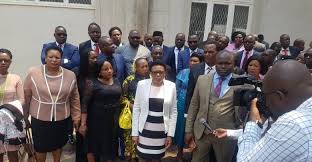 The MDC MPs yesterday continued with their non-recognition of President Emmerson Mnangagwa when they walked out of the his SONA speech, however, the action triggered the fury of the Speaker of the national Assembly Jacob Mudenda who immediately ordered the docking of the MPS salaries and allowances for the past five months.

The legislators in a well-choreographed symbolic move walked into the chambers, remained seated against protocol when Mnangagwa walked in and immediately filed out as the President started his speech to lay the legislative agenda of the second session of the Ninth Parliament.

A similar move was met with commotion in November last year during the presentation of the 2019 budget as police had to grapple with the legislators.

Soon after the boycott MDC chairperson and Bulawayo East MP Thabitha Khumalo said they needed dialogue between their party and Zanu PF to solve their differences.

“We have no money, we have no food, hospitals are not working, you name it (sic) it’s happening in his country and they are busy wasting people’s time talking about nothing. Time has come for them to understand that as a country we can fight as we can, but we need dialogue,” Khumalo said.

National Assembly speaker Jacob Mudenda said government was going to withdraw allowances owed to MDC MPs who staged a walk out on Mnangagwa.

“No allowances for the past five months. I would want to instruct Finance minister Mthuli Ncube to withdraw their pay sheet, no payment for debates of the outstanding balances and for today’s sitting,” said Mudenda, who is also a ZANUPF politburo member.

Chief’s Council president Charumbira urged MDC to engage Zanu PF and Mnangagwa if they had grievances.

“That was bad and unfortunate. We do not solve issues by fighting on and on. We should respect our President. He is the head of the State and should be respected at all times,” said Charumbira.

Post covid-19 era: Zimbabwe needs to re-visit on goals 1 ,2 and 5 to remain sustainable

Selective application of the law now an everyday thing

Why the youth should register to vote