This was announced Thursday afternoon by Zanu PF secretary for administration Obert Mpofu. 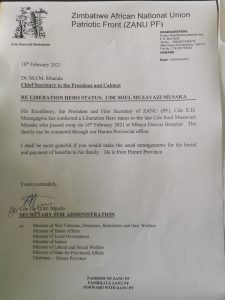 While his death united a generally divided nation, few would have dreamt the Mbare born artiste could rise to being conferred with one of the highest honours of the land.

Soul Jah Love is not the first Zimbabwean musician to be conferred with a status that has generally been preserved for those who fought the liberation struggle while maintaining loyalty to the ruling elite.

Both musicians fought in the country’s war of liberation.

International music icon Oliver Mtukudzi was also conferred with national hero status when he died 2019 although he had no liberation war history.

Soul Jah Love breaks his own record on being honoured with the status when he died aged 31.

Although he did not have any known links to Zanu PF, Soul Jah Love also sang songs praising both Zanu PF and President Emmerson Mnangagwa.

The conferment of national hero status on the youthful musician came hard on the heals of denial of the same honour to prominent Filabusi traditional leader Chief Vezi Maduna Mafu who died weekend and got the consolation of a State assisted funeral.

Late charismatic MDC founding leader Morgan Tsvangirai was also denied the honour of the land when he died 2018 after President Emmerson Mnangagwa pampered and acknowledged his works for playing a part in the country’s democratic trajectory.

Mutare In Rates Climbdown After Pressure From Youths