by zimsentinel
in Community Focus, social
0 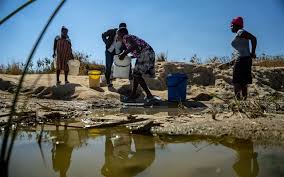 A health time bomb is looming in Epworth owing to acute water shortages in the satellite suburb, with residents now relying on unprotected sources.

In an interview with Zimsentinel, Beauty Mashava a resident said water shortage had greatly affected them as they are now resorting to drinking water from unprotected sources.

Epworth Local Board secretary Willton Mhanda says Epworth and Overspill clinics are in a dilemma as the local board was now buying water every week to cater for the patients.

“The situation has reached its peak since the local board is now buying water every week from water suppliers to curtail water shortages at Overspill and Epworth clinics” Mhanda said.

Another resident Angelina Magasa said acute water shortages had caused untold suffering among residents. They are being force to walk long distances in search of the precious commodity.

“It is causing us serious problems. We have since limited times of using the toilets and many are opting to use nearby bushes.” said Magasa.

Meanwhile, Mhanda said with the assistance of Non-Governmental Organisations (NGOs) and co-operative organisations the board was rehabilitating 38 boreholes to ameliorate the water crisis and so far it has rehabilitated two boreholes in Glenwood.

“We as a Board with the assistance of Evangelical Worship and Welt Hunger we are in a process of rehabilitating 38 boreholes to curb water shortages and so far we have rehabilitated two boreholes in Glenwood.”

Body Audit Director, Nyamugoneka Taonehama said they were going to remove people in wetlands under the local master plan because wetlands are sources of water.

“The council is going to remove people from wetlands under the Local Master Plan because they are sources of water. We will remove these people after the government has given us more land because there is nothing we can do as a Board since people allocated themselves (land) before the Epworth Local Board was formed,” Taonahama said.

Meanwhile, Epworth Local Body is appealing to the government and well-wishers to provide them with funds to build a water reservoir, drill more boreholes and to implement water infrastructure projects.