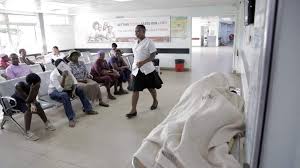 In a moment when Zimbabweans are expecting fulfillment of the election manifesto where the new government promised massive improvement in health sector in terms of infrastructure, health personnel and medicines, they are experiencing a hard time as the health system continues to deteriorate.

It is the State’s duty to provide access and affordable healthcare to each and everyone of its citizens. In Zimbabwe, it becoming evident that the country needs sustained investment in primary health care to rejuvenate the health system and close the gaps in access to.

Presently, infrastructure in hospitals is dilapidated, some is obsolete; medicines and supplies are in short supply; doctors, pharmacists, paramedics and nurses are inadequately and poorly remunerated. The country is still far off the mark in attaining the Abuhja Declaration that asks States to put 15% of their national budgets to the health sector.

Strikes by health workers are taking place again and again in Zimbabwe further placing human lives in great danger. The ongoing strike action by the doctors has further exacerbated the health delivery system.

Doctors accept that they should not put their patients at risk by engaging in industrial action, but they also feel that there must be a speedy, fair and impartial way of solving disputes.

Last week, doctors embarked on an industrial action as a way of pushing their employer to increase their salaries. This resulted in many patients bearing the brunt, as they were left unattended while their health was in a critical condition and some even lose their lives.

“We know it’s not proper to risk people’s lives, but the government is also risking our families lives as we can’t survive in such an economy with a useless pay. So, we had no option but to push the government to urgently address our concerns by,” said a doctor at Parirenyatwa.

The current situation in Zimbabwe is depriving citizens their right to health. Patients, due to shortages in public dispensaries, are being forced to buy medicines at private pharmacies which are charging them in US dollars.

It must be noted that about 90%of the workers in Zimbabwe earn their salaries and wages in local currency and therefore cannot afford buying the drugs in pharmacies.

There are patients with chronic illnesse,s who should not miss their medication and due to lack of drugs in the hospitals they are now taking cheaper substitutes from the unregulated parallel markets. This has serious side effects, while others who cannot afford buying medication have turned to faith healing and traditional medicines.

Citizens are urging the government to prioritise the health sector, so that everyone can access health services despite their social status.

“Government should prioritise the health sector and equip it with all the basic necessities they need, because most of us ordinary people who can’t afford buying drugs in a pharmacy are dying,” said a patient at Parirenyatwa hospital.

Many people are dying in pain in their homes or health institutions because they cannot access or afford the cost of drugs even painkillers and like the government, their relatives are watching them die because they are also equally helpless.