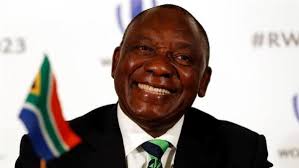 Government has admired the way South Africa President Cyril Ramaphosa has handled the public’s behaviour towards him on Saturday at the former President’s State funeral when he was booed when he gave his eulogies.

Presidential spokesperson George Charamba said Ramaphosa’s reaction was a very humble move and the government was pleased that he has apologised.

He further stated that Ramaphosa’s humbleness has calmed the public as they responded in a cheering manner to his apology.

“Ramaphosa’s reaction was one of kind, which was very humble of him. He took a good move apologising to the public. The public even calmed down in responding to his apology in cheering voices. That was good,” said Charamba.

Charamba further said the government did not condemn the public’s behaviour as it was their right and that was their way of airing their grievances to the South African President.

“The public has done nothing bad. It was their way of telling Ramaphosa that they are not happy. It is their right anywhere to express themselves,” he added.

Information secretary Nick Mangwana said although the government did not expect the public’s behavior, it did not condemn it and they also commend Ramaphosa’s reaction.

“No one was expecting what the public has done to Ramaphosa but that was no wrong, they just showed him they were not happy. Ramaphosa responded well, apologising was a very good reaction.”

Ramaphosa  apologised to Zimbabweans and all fellow Africans on Afrophobia attacks that  happening in South Africa, committing that his country  was not xenophobic and action to protect African migrants would be take. These Afrophobia attacks have been the third in the past decade.