As doctors vows not to return to work 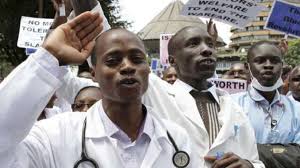 Doctors has continued on their strike over the missing of their colleague, the acting Zimbabwe Hospital Doctors Association president Peter Magombeyi, who was abducted by unidentified men on Saturday at his home in Budiriro few days  after receiving some threatening messages on his phone.

ZHDA led by Magombeyi have been on strike since last week pushing for higher wages for State doctors in the wake of soaring costs of living and the action has greatly affected patients who are left unattended.

Doctors whose protest march to Emmerson Mnangagwa’s offices was thwarted by anti-riot police vowed to continue with the industrial action until Magombeyi has been accounted for.

Dr Chise from Parirenyatwa told ZimSentinel they had continued with their industrial action, but on a much higher scale than before Magombeyi’s abduction. Previously, some doctors were still reporting for duty

“Senior doctors we were working last week, when the junior doctors went on strike over salaries, but due to the disappearance of our colleague we have also downed the tools as we are seriously concerned about him,” said Chise.

Dr Tangara also told ZimSentinel that they are not going to break their promise which is no work until their boss was returned safely to his family.

Doctors at Mpilo Hospital in Bulawayo have also joined the industrial action in solidarity with their Harare counterparts over Magombeyi’s abduction.

Crisis in Zim, Teachers protest in solidarity with doctors

Crisis in Zim, Teachers protest in solidarity with doctors

Post covid-19 era: Zimbabwe needs to re-visit on goals 1 ,2 and 5 to remain sustainable

Selective application of the law now an everyday thing