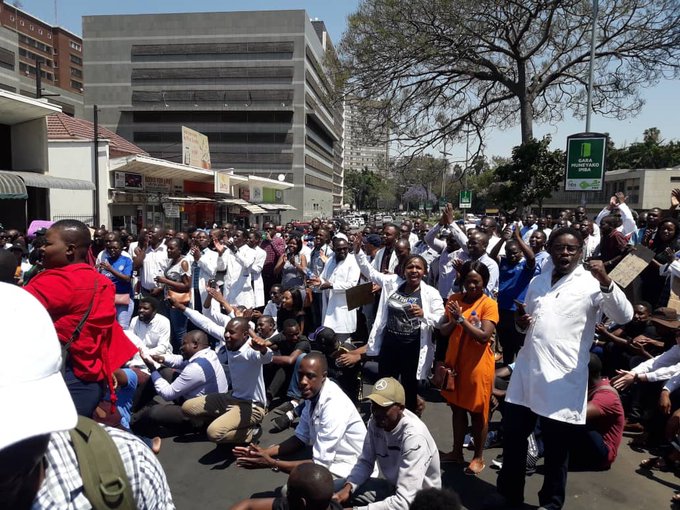 Doctors on Monday marched to In Harare central business district (CBD protesting against abductions of activists, calling for the immediate release of their colleague and Zimbabwe Hospital Doctors Association (ZHDA) president Peter Magombeyi who was abducted by unknown armed man at his house in Budiriro on Saturday.

The protesting doctors however, were barred by anti-riot police officers from storming Munhumutapa Building that houses the Office of the President.

The combative doctors said they will not return to their workstations until Magombeyi was released, further making the health situation messy particularly for the poor who cannot afford visiting private hospital for services.

ZHDA secretary-general Tapiwa Mungofa read a petition which among other things said “will resign if the government fail to release their colleague unharmed” and that the petition would be handed over to Home Affairs and Health ministries.

The doctors during the protest held placards inscribed “No work until Peter is back”; “Hatidi kungotorwa torwa nemasasikamu”; and “Government we want our Peter”, among others.

One of the protesting said the government had failed to solve their pay grievances and now the disappearance of their colleague had made them to unite and fight for their.

“They give us nzungu after all the work we do. We downed the tools but nothing was solved. Now they have abducted our boss that is violating our rights. We are no longer safe, maybe tomorrow it could be me who would be abducted. So we have united to fight for our rights”, Chadero said.

Another doctor, identified as Chiriseri alleged that Magombeyi was abducted simply for calling a strike to force the government to review their salaries and conditions of.

The doctors said they are worried about Magombeyi’s wel- being as his phone was not reachable, and that they have heard nothing from him since his abduction.

Mungofa went on to state that they are going to shut down the hospitals until Magombeyi is found safe and healthy.

In the past month, several government critics and human rights activists were been abducted from their homes and tortured by suspected State security agents before they were dumped. Civil society and the EU have complained to government over the abductions.