by zimsentinel
in Sport & Culture
0 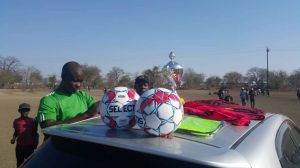 The Platform for Youth and Community Development (PYCD) and the Sports for Excellence have officially opened the ball games which will be held on 19 October 2019 at Takwirira High School in memory of the Cyclone Idai victims in Chipinge.

The games were launched on 5 October at Takwirira High School when the organisations announced that the competitions will be comprised of eight community teams (Group A) and eight teams from secondary schools (Group B) in the area.

The competitions will start on 19 October 2019 and they will be between secondary school teams and group B teams will compete on 20 October 2019.

The first and second winners from both groups are expected to meet on 1 and 2 November 2019 and compete so that the actual winner will be nominated.

There are various awards on the competition which will be given to everyone who participated and the awards include trophies, uniforms, balls and many other things used in ball games.

The Vemuganga Community radio Station will also be broadcasting live from the competitions.

The same competitions will also be conducted in Chimanimani after taking place in Chipinge.

Citizens call on Zec to comply with the Constitution