Begging, an alternative for suffering Citizens 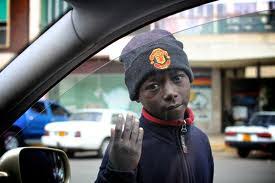 As the economy continues to deteriorate, marked by the local currency fast losing its values against the United States dollar and spiraling costs of basic commodities, many people living with disabilities have been hit hard and resorting to begging from motorists at the intersections in the capital.

Desperate times call for desperate measures, and true to this adage, the current economic situation has left many people feeling useless and failing to fend for themselves, hence resorting begging from those who may have as the only means to survival.

In the streets of Harare, beggars are found everywhere in public spaces such as road intersections, restaurants, banks, supermarkets, food outlets, bus terminus and churches.

Poverty and unemployment are some of the major reasons why people develop a begging behaviour.  The collapse of the economy also led to the collapse of social protection grants for disabled people.

The begging population is dominated by children and people with disabilities. Some of them would be sitting or standing in one place with a receptacle entreating donations, others are elderly people aged from 45 and above and children who are usually aggressive as they do not know the patterns of begging very well.

A beggar at corner Julius Nyerere and Jason Moyo, Tinovimba Muchare said is surviving through begging as he is blind and unemployed hence has no other means to cater for his family.

“I was born blind, no one wants to employ me, and things are hard so I and my family survive on begging. Sometimes I earn $10 a day so will buy food,” he said.

Another beggar, Mazviita Nyaro, said she came to the streets because no one was helping her and her children, who she said also live in the streets since they cannot afford paying rentals.

“I couldn’t afford renting so I and my children stay here in the streets and begging is our daily routine so we are surviving out of generous people who share whatever they have with us,” said Nyaro.

Harare City Council spokesperson Michael Chideme confirmed there was an increase in number of beggars and it was the responsibility of government under the ministry of Social Welfare to cater for them, hence the council cannot do anything about it.

However, the government does not have an active policy to promote the livelihoods of disabled people. Society in turn condemns them and does not offer them opportunities to exploit their potential.

People with disabilities used to access a monthly grant to cushion them from the economic challenges. Though the money was not much, it contributed towards the buying of food for the family. Its demise, however, contributed to an influx of vulnerable people into urban centers and in particular the streets of Harare.

Social Welfare minister, Sekai Nzenza, was not immediately available for comment. However, she has told Parliament last month that she was working on increasing pensions from NSSA to cushion retirees from the vagaries of the hyper-inflationary economy. Currently pensioners receive $80 from the compulsory scheme while invalidity grants are pegged at $60.

While it is believed that beggars are homeless, dirty and poorly dressed human beings, there is also a new crop of money beggars in Harare who are nicely dressed men and women who will be pretending to have lost their wallets, hence asking for help.

Their courteous surely evoke someone’s emotions, believing these are genuine people who are indeed in need of bus fare, but they are not.

Brawl after couple discovers they are HIV positive