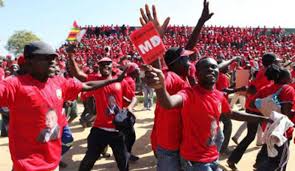 Movement for Democratic Change led by Nelson Chamisa has vowed to press ahead with its protests against President Emmerson Mnangagwa regime despite the police prohibition orders that banned demonstrations for 90 days, arguing the bans are unconstitutional.

The party says demonstrations are a right protected by the Constitution and to that end it would seek to exercise that right.

Police issued a prohibition order  in terms of section 26 (9) of the Public Order and Security Act  banning all public  demonstrations that MDC A had organised in four provinces from the 16th to 22th of August.

The prohibition ban lasts for 90 days and it states that any person who knowingly opposes or fails to comply with the notice shall be guilty of an offence.

MDC secretary for Elections Jacob Mafume told ZimSentinel that his party would continue to exercise its rights as enshrined in the constitution despite 90 days ban, saying those who are banning demonstrations have to justify their reasons for stopping the protests.

“The 90 days are unconstitutional, we as a party we have a right to demonstrate every day, any day in terms of the constitution and will exercise that right. It is those who are banning the demonstrations for 90 days that will have to prove why they are doing so,” Mafume said.

He added the prohibitive ban on demonstrations illustrated the repressive nature of the government and its failure to fulfill its promises of a democratic nation.

“The ban on demonstrations is illustrative of regression in a repressive state. The false dawn that had been promised has become a very dark midnight. How do you ban a right that is constitutional?” Mafume queried.

He further stated the government should take correct measures to ensure that what happens before and during the demonstrations was proper and refrain from banning citizens from exercising their rights.

Meanwhile, MDC National Organizing Secretary, Amos Chibaya was yesterday given $400 bail coupled with conditions on charges failing to comply with a prohibition order issued by the police banning the August 16 demonstration in Harare for failing to control the public that demonstrated.